What is a Jig Grinder? 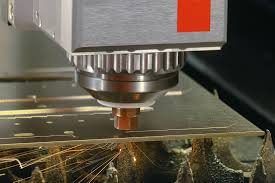 Have you heard of a jig grinder?

According to Wise Geek:

“A machine that can reshape metal and metallic items is often called a grinder. There are several types of these machines. A jig grinder is one that is often used to grind complex shapes and holes. It may be used to grind items such as jigs, dies, and gauges.

“Grinding machines generally work on a similar principle. They use abrasion to change the form of metal and metallic items. This means instead of cutting a work piece, its form is changed by rough spinning wheels that erode the material.

“One of the limitations of the various grinding machines is their lack of precision. When one speaks of precision grinding, he is generally referring to the ability to change a work piece by a fraction of a millimeter. A jig grinder is special in this way. Such a machine is often relied upon when accuracy is essential to the job.

“A jig grinder typically uses a removable, air-driven spindle. This is used to rotate the grinding wheels, which are sometimes called bits. Whether the speed of air-driven spindles are fixed or adjustable varies from one machine to another. The use of such a spindle, in either case, usually allows for high-speed grinding that is pertinent to the type of work a jig grinder is used for.

“The wheels also play an important role in getting a grinding job done. At one time, these wheels were problematic. As they worked to eliminate material from the work pieces, they were also destroying themselves. This meant machines often had to be shut done so the wheels could be changed. Now, new materials are used for the wheels, which extend their lives and prevent the need to change them as frequently.

“Another part of the machine that is important is the work table. This is where a work piece is fed into the machine. These are usually adjustable. Their degree of flexibility can make a big difference in the outcome of the job. Many jig grinders now have guided feeding so less effort is required from the machine operator.

“Technology has changed jig grinding in beneficial ways. To begin, many machines are now computerized and operate with special software. This often eliminates much of the geometric calculating once required of the operator. Much of the labor has also been reduced by the automation of these machines, some of which can perform tasks such as making reversal patterns or offering pre-programmed specifications. The improvements made can result in much faster grinding, operation by less-skilled workers, and a higher degree of accuracy.”